Last year G2 introduced predictions for 2018’s major digital trends, but this year the focus is on trends in specific industries and how digital transformation will affect them in 2019.

This post is one part of G2's 2019 digital trends series. Read more about G2's approach to digital transformation trends in an introduction from Michael Fauscette, G2 Crowd's chief research officer.

We have heard for years that virtual reality software (VR) was the thing of the future, poised to be the biggest technology of our generation. But time has told a different story. VR has a limited adoption rate among both businesses and consumers. We are predicting that that another futuristic technology is ready to overtake VR in the near future—augmented reality (AR) software.

Last year G2, introduced predictions for 2018’s major digital trends, but this year the focus is on trends in specific markets and how digital transformation will affect them in 2019. If you’d like to read more about G2’s approach to digital trends or read about trends in other industries, you can find Michael Fauscette’s, G2 's Chief Research Officer, 2019 trends introduction here.

AR is often overshadowed by its seemingly flashier counterpart, VR. VR has become more mainstream, but AR has slowly been developing in its shadow. The global augmented reality market was valued at around $3.33 billion in 2015 and is expected to reach approximately $133.78 billion in 2021, growing at a CAGR of slightly above 85.2% between 2016 and 2021. 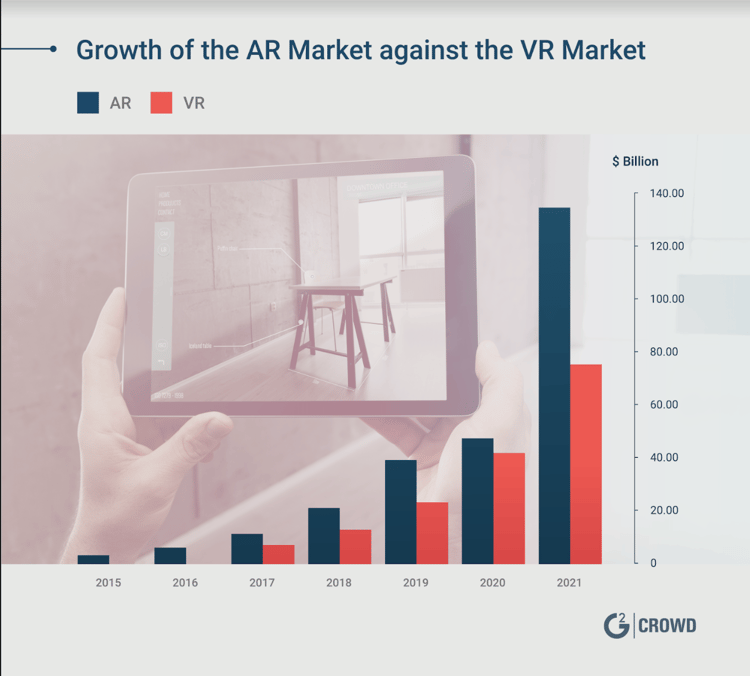 While VR has developed a foothold in both consumer and business markets, AR technology is set to outpace its growth drastically in the next few years.

The secret weapon that will lead to AR’s boom is mobile devices. AR’s ability to be deployed on mobile phones or tablets makes it more accessible than VR, which requires headsets for use. The fact that AR can be used on the devices that we all carry in our pockets every day makes adoption easier, less intimidating, and more affordable.

Thanks to tools such as ARKit and ARCore, AR is enabled on more than 500 million devices. The iOS App store offers more than 2,000 AR apps, and Google Play offers more than 200. Many of the mainstream apps are games, such as the massively successful Pokémon Go.

As consumers become more used to AR experiences in their everyday lives, the barriers to entry for business adoption will continue to lower. While no business app has reached this level of success yet, mobile AR has massive potential in a number of different fields. We can expect AR to lead to massive developments in advertising and streamline processes in manufacturing.

A number of brands have utilized AR for their own advertising campaigns. AR can provide a completely personal experience to the consumer and facilitate an increase in both user engagement and brand recognition. Take the IKEA AR app. It was launched in the fall of 2017 and enables users to visualize what a piece of furniture looks like in their house.

This totally revolutionizes the buying experience for IKEA customers. As of June 2018, there are no hard numbers on this app’s impact on IKEA business. But the app itself has stayed near the top of Apple’s ARKit downloads, which indicates a continued interest in this type of tech and the potential for more and more retailers to create apps like this.

Businesses can use this opportunity to market the products to consumers in a whole new way, by letting them visualize how a product can fit into their daily lives. 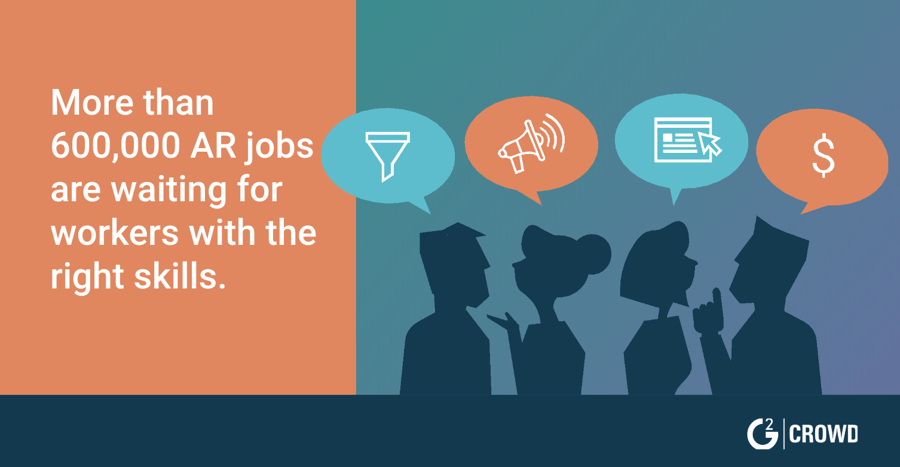 AR adoption has been quickly climbing in this industry, especially as IoT has found its place in the manufacturing world through intelligent objects. AR offers these users a “data to human interface,” which means that users can utilize intelligent objects equipped with AR to see a world view augmented with a rich set of data.

A rising subset of AR software, Industrial AR platforms, is specifically intended to assist those in the manufacturing fields. Not only do these tools enable industrial employees to visualize a data set, but they can also assist in physical labor jobs. For example, if an employee needs to repair a part, AR content can be overlayed onto the existing product, so that the user can see what the end result should look like. Industrial AR tools can also be deployed by multiple users at once, so that a supervisor can see what his or her employee sees as they work in the field.

With manufacturing jobs on the rise, AR software is likely the key in the digital transformation of this industry.

AR has positively impacted health care in an unexpected way—telemedicine. Telemedicine is  the concept of receiving a medical consultation without physically being in the same room as a doctor. Physical therapists can benefit the most from this. AR technology can literally allow doctors to remotely administer therapy to patients. AR software lets doctors map the necessary motions needed for physical therapy straight to their patient’s body. A specific type of AR software—AR training simulators—can give both physical therapists and other health care providers the necessary in-depth training they need to succeed in their field.

For the last few years, industry experts predicted that the next year would finally be the big one for VR—that we would finally begin to see mass user adoption. Multiple reports are still predicting the VR will be worth more than $25 billion by 2022.

Augmented reality surpassing virtual reality technology is partially due to the successes and increased modes for adoption listed above. In 2016, reports projected VR sales to rise to more than 45.6 million devices sold in 2020. According to the Register, Q1 2018 only saw 1.2 million VR devices sold—that does not pace well with early projections for 2020.

That’s not to say that VR is a total bust. But the fact is that VR is consistently being adopted below predictions. And as shown by hardware sales, consumers are not taking to the technology yet.

Aside from the gaming industry and the advent of social applications like VRChat, there hasn't been a wide welcoming to the technology. So why haven’t the masses adopted the technology like experts predicted they would?

Perhaps the most appealing part of VR is the ability to completely immerse yourself within the content. But VR content still looks fairly archaic. High quality isn’t easily available to the masses. It tends to be reserved for specialized fields such as medicine or design visualization. Because of that, the general public has not seen enough use cases for VR content’s relevance to their lives.

David Shapton of RedShark aptly called the development of VR software vs. VR hardware a “chicken and egg situation.” As previously stated, VR headsets are developing quickly, rapidly becoming more advanced than software. This could mean that VR hardware would no longer be able to support accompanying software. But the reverse is also true—if VR software finally hits its stride, there’s a real chance it may not sync with current headsets on the market. VR software and hardware need to stay along the same relative trajectory path in order for the market to take off.

Possibly for this reason, headset sales have been tanking for the last few years. According to the SiliconANGLE. VR headset sales have dropped nearly 34% since Q2 2017. Multiple sources attribute this drop to the fact the majority of headsets were previously screenless—meaning you needed to insert your phone into the headset to display the content.

2018 saw more headsets with a built-in screen, negating the need to insert a phone in the hardware. Some hardware developers have even begun to build their devices with the option to be wireless, which saves users the hazards of operating the systems while attached to a wire.

However, sales for four major VR headsets are still on the decline.

However, big names in the VR industry are focusing their efforts on improving headsets. For example, HTC released a headset in early 2018 with wireless capabilities. This headset includes a high-resolution screen with improved sensors. With headsets evolving quicker than the software that accompanies it, that software may not be able to integrate with the headsets anymore. It will be hard for software development to catch up if headset development is already quickly surpassing it.

This creates a sort of vicious cycle. Unless both VR software and hardware gets to the same level of technological advancements, businesses will have a hard time seeing the value in investing in VR technology.

The Combined Future of AR and VR

While we predict that AR will soon come to surpass VR in mass adoption, the future of these two technologies are tied to one another. Developers in the space are still committed to launching VR. And this technology still poses massive benefits to both businesses and consumers.

But it is safe to say that as the masses became intrigued by the fantastical elements of this software, expectations grew far beyond the realistic advancements that VR was actually seeing.

VR will continue to grow, just slower than anticipated. Early iterations of VR existed as early as the 1950s, where as the first versions of AR were introduced in the 1990s. It’s safe to make the assumption that AR was born from VR, as it is the older technology. And in 2019 and beyond, AR will benefit from the further development of VR technologies.

However, AR has begun to develop on its own, becoming more compact and less cumbersome than VR. The software brings in a virtual element without losing the real world. VR doesn’t allow you visualize a 3D image interacting with a real-life product or space like AR can. For that reason, by the year 2025, businesses will see that AR has a more logical place in business than VR.

Interested in learning more? Read our guides on the history of augmented reality and virtual reality, and be sure to brush up on your knowledge of potential security threats with virtual reality, while you're at it. 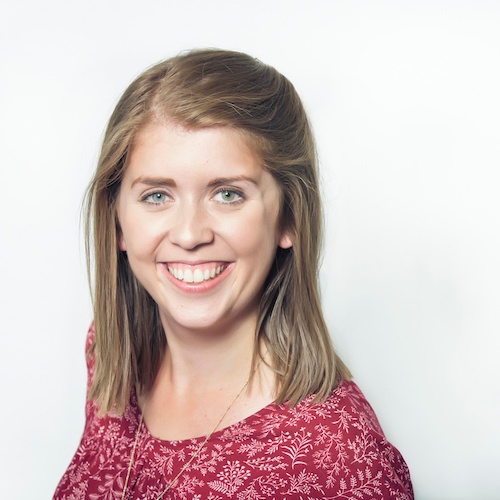 Brynne is the Buyer Inquiry Team Lead at G2 Crowd. In addition to writing, she leads the research specialists in providing personalized software and services recommendations to buyers. She wishes she had interesting hobbies to include in this bio. 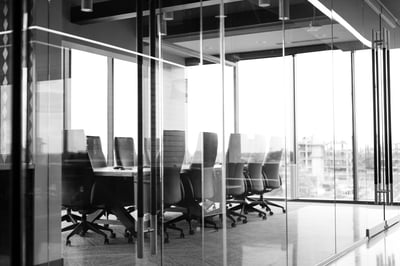 Zoom’s Momentum Carries the Company Into a Surging IPO

We are in the full swing of technology and cloud software vendor IPO season with Lyft,... 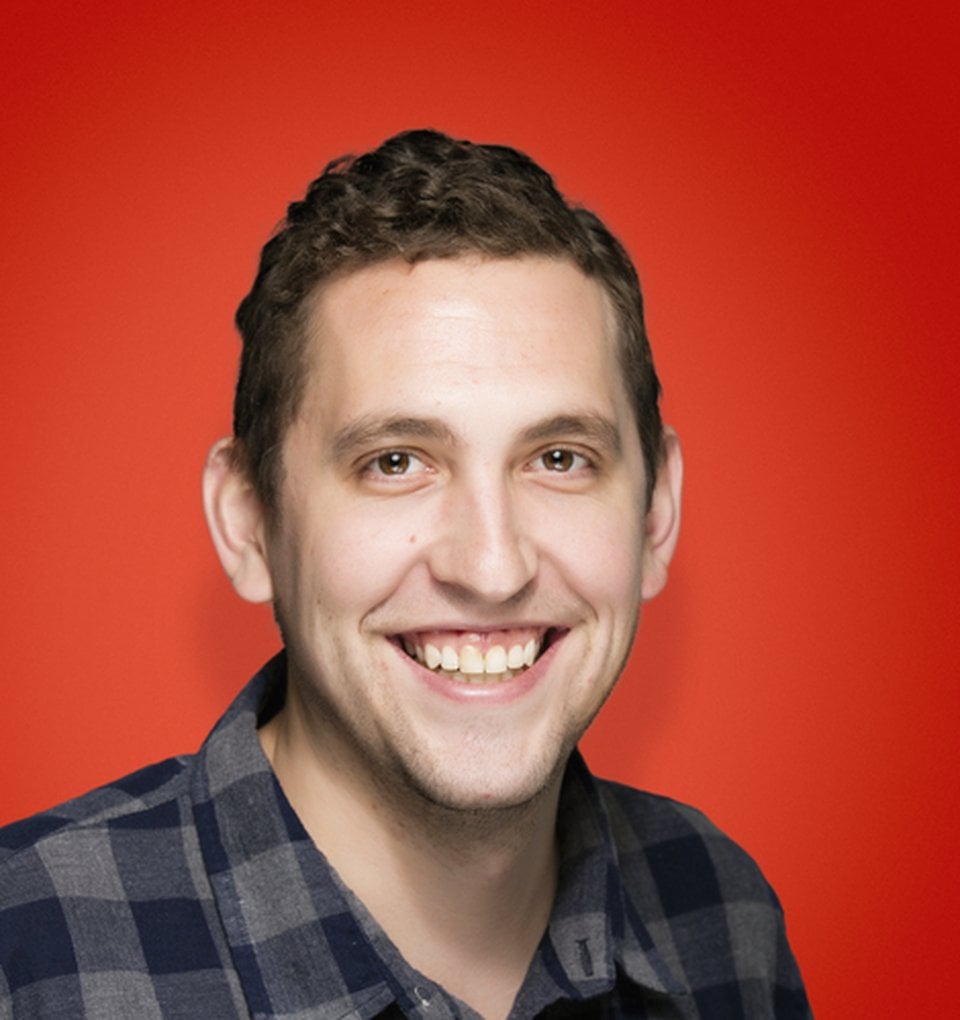 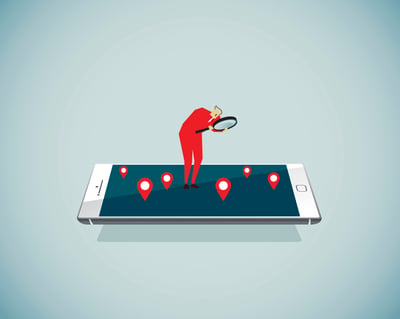 Local SEO Tech Trends in 2019 and Beyond

Every day, countless people search for local businesses and services nearby. Is your business... 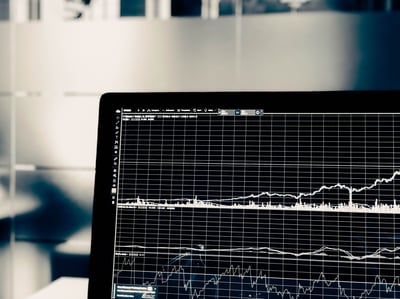 The 2020 editions to G2’s annual Digital Transformation Trends are in the works. In the past,...