Computer-aided design (CAD) software was developed as part of a project delivered in 1960 by MIT’s Electronic Systems Laboratory, in collaboration with the United States Air Force.

The technical memorandum of the project states, “The objective of the Computer-Aided Design Project is to evolve a man-machine system which will permit the human designer and the computer to work together on creative design problems.”

The state of CAD software

While tech and the tech industry have both evolved tremendously since 1960, the objective of CAD has remained the same. In more than half a century since CAD's inception, some products have evolved into product lifecycle management (PLM) software; others are still focusing on design. At the same time, there are many 3D design tools that can be a good alternative to CAD software for companies with basic product development needs or freelancers.

Despite the alternatives, CAD software maintains a critical role in the design strategy of companies from multiple industries like manufacturing, construction, civil engineering, and more. To understand how CAD software is evolving, we analyzed more than 2,000 reviews of general-purpose CAD software users. These reviews were submitted between February 2013 and May 2020.

The reviewers were majorly CAD users (82%) and system administrators (6%). Almost half (48%) of the reviewers came from small businesses, with 32% belonging to mid-market companies and 20% to enterprise businesses. Of the 110 industries mentioned by users, the most frequent were architecture and planning (27%), civil engineering (16%), design (15%), and mechanical or industrial engineering (10%). Most users had significant experience using CAD software: 34% mentioned 5 years or more of experience.

The image below provides an overview of the respondents by role, company size, and level of experience. 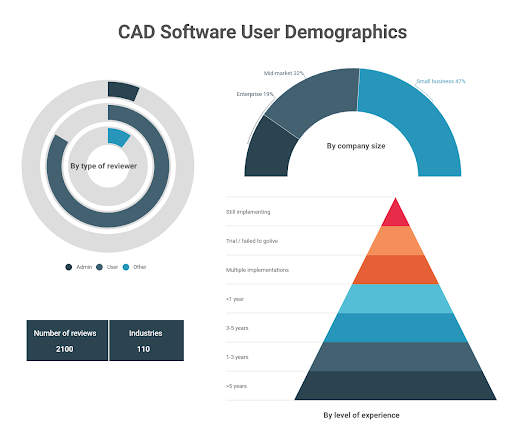 What reviewers think about CAD

Each reviewer provided feedback on multiple questions on satisfaction, pricing, ROI, adoption, and so on. Upon analysing the product reviews, the overall consensus is that CAD software is headed in the right direction, mentioned by 80% of reviewers.

To better understand what users think about CAD, we compiled their answers and analyzed them by criteria (simple six*, ROI, pricing, and so on), and by company size or industry.

*The simple six are the six questions asked of every user who leaves a product review. These questions include: does the product meet requirements, what’s the ease of use, ease of setup, ease of admin, quality of support, and ease of doing business with. These products are ranked on a scale of 1-7 with 7 being the most satisfied and 1 being the least satisfied.

How are users rating their CAD systems? 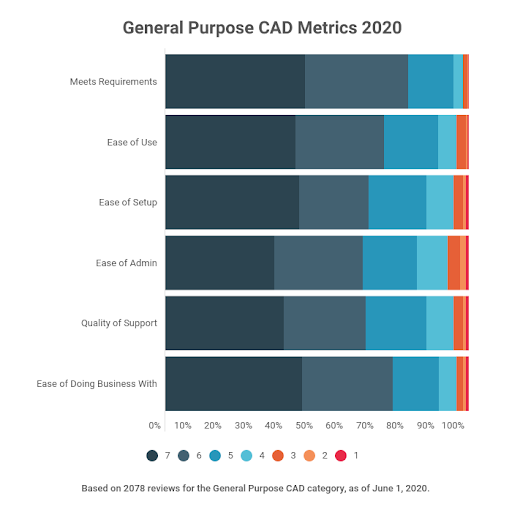 Across the board, users are very satisfied with their CAD systems. From ease of setup to ease of use, general-purpose CAD vendors seem to consistently please customers with products that are intuitive and offer a wide range of functionality.

CAD vendors not only provide systems that are easy to use and simple to implement, but they also present users with a wide range of how-to tutorials and discussion communities so they can better understand how to fully utilize their products. Various users in the general-purpose CAD space highlight this as an essential feature in our G2 review data: 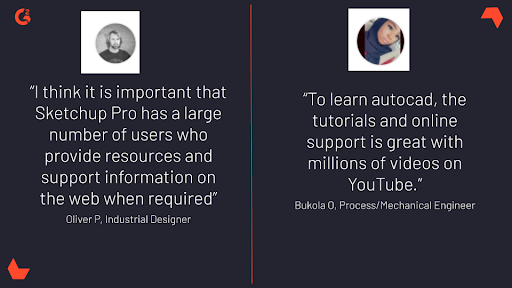 What do users think of their CAD system’s value?

A majority of CAD software in the marketplace is expensive. While some CAD vendors offer annual subscriptions in the average range of $1,500-$3,000, there are also systems that come as one-time purchases at a price tag of $12,000.

On a positive note, most CAD users who purchase general-purpose CAD software see their return on investment (ROI) in 1 year, and 41% of users even notice so in less than 6 months. 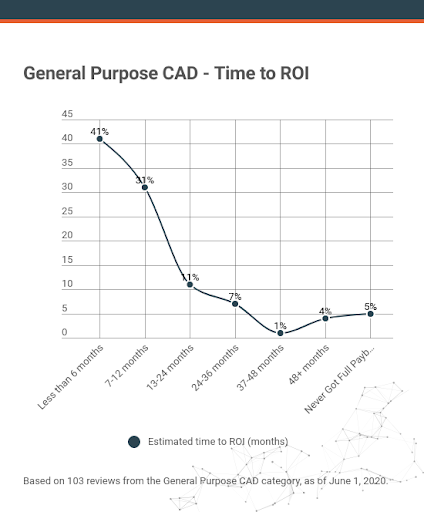 How quickly do users implement their CAD systems?

How quickly it takes to implement a software is particularly important for a system that might be as pricey as CAD software. Users want to get their systems up and running to make use of the software as quickly as they can. In this regard, users implement their CAD systems at a rapid pace which is advantageous to general-purpose CAD users: 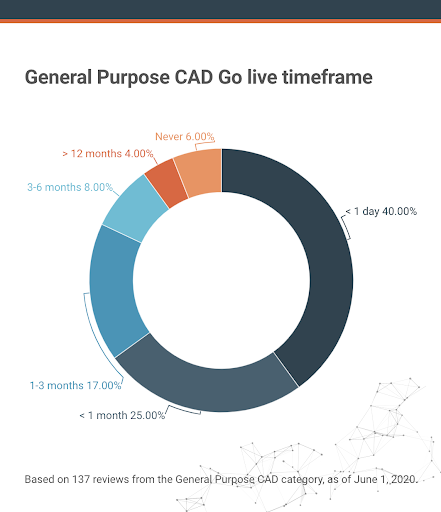 CAD is being used in more vertical industries

Historically, CAD had been exclusively used by civil engineers, architects, and manufacturers. These industries craved the precision and detail that came along with computer-aided design software. This was primarily because it provided them with a dynamic analysis of their structural designs as well as the ability to place their designs into 3D environments.

Using G2 review data we were able to see some of the industries represented in the General-Purpose CAD category from August 2012 until January 2015. 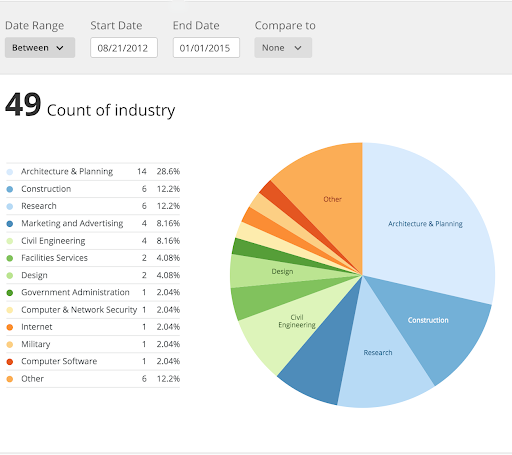 The data reveals that the software was mostly utilized in architecture, construction, and civil engineering. While there were some users in other industries, the data shows that these industries are scattered and few and far between.

Analyzing the data between 2015 and today paints a very different story, however. Looking at the data below, it can be inferred that “other” industries have taken over as the main industry segment that’s represented in the general-purpose CAD software, accounting for almost one third of all reviewers that come to the General-Purpose CAD category. Additionally, there are an astonishing 103 different industries represented in the entirety of the General-Purpose CAD category. 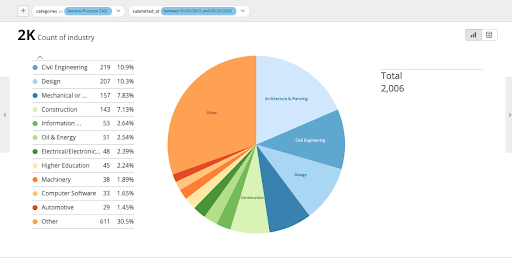 This data points to a larger trend that is happening within the CAD landscape. Industries are realizing the dynamic use cases of this software and using it to their advantage. From fashion to the automotive industry, CAD is allowing an increasing number of users to rapidly design 3D prototypes, saving time and improving accuracy, precision, and control in drafting and design.

Over the coming years, a growing number of specialized CAD vendors are expected to emerge and offer solutions that are geared for specific verticals.

Since CAD tools have been around for decades, the market is very mature, which also means that there are few major developments disrupting it. That doesn’t mean that CAD tools aren’t evolving. On the contrary, many CAD providers announced product enhancements, partnerships, and other improvements to their offerings.

Some of the most relevant news for each category are summarized below:

New technologies such as AR and 3D printing

The manufacturing industry is changing through the adoption of technologies like additive manufacturing (3D printing) used to quickly create spare parts and components, and augmented reality (AR), which helps improve the product development process. To keep up with these changes, CAD vendors announced new AR and 3D printing features in 2019, the most important being:

Instead of designing and managing CAD models, companies may choose to use CAD libraries where they can find 2D and 3D CAD files ready to use. These files can be used for 3D printing, in manufacturing, or as a starting point for more advanced models. CAD libraries and catalogs aren’t replacing but complementing general-purpose CAD software. In 2019, several companies launched online catalogs for CAD and BIM models, such as iCONN Systems and Monkeytoe. Also, TraceParts announced APIs which allow companies to display CAD models and data on their websites.

The adage “if you can’t beat them, join them” applies to the CAD world for several reasons: CAD is by definition collaborative which means that competitors often partner to provide better features. Smaller vendors don’t have huge R&D budgets so they prefer to deliver new features through integration. Some of the most important partnerships announced in 2019 were:

Despite improvements, CAD software is still difficult to learn. Also, CAD users need to keep up to date with the latest features, which isn’t easy without training. Technologies like cloud and mobile make it easier for users to learn CAD through access to a multitude of content delivered in multiple formats (video, text, interactive, and so on). CAD vendors released new learning offerings in 2019, such as Vectorworks University, or collaborated with learning providers like Coursera to deliver online training.

Traditional CAD software has been delivered on-premises and the cloud delivery model isn’t yet provided by all vendors. To transition from on-premises to the cloud, an increasing number of vendors now offer both options. A few examples from 2019 are:

All these releases, partnerships, and collaboration projects make the CAD market more open and diverse by providing new options to designers and engineers. For instance, CAD users can now choose between buying or renting software, or find models using CAD libraries. Once the CAD model is finalized, there is the option to manufacture it internally, 3D print it, or outsource production.

What’s next for CAD

An analysis of 2999 reviews from 2015 to 2020 shows an increase in satisfaction with CAD systems. As shown below, CAD reviewers gave mostly maximum scores for “meets requirements” in all years, with the exception of 2016. The percentage of maximum scores increased from 33% in 2015 to 60% in 2020. 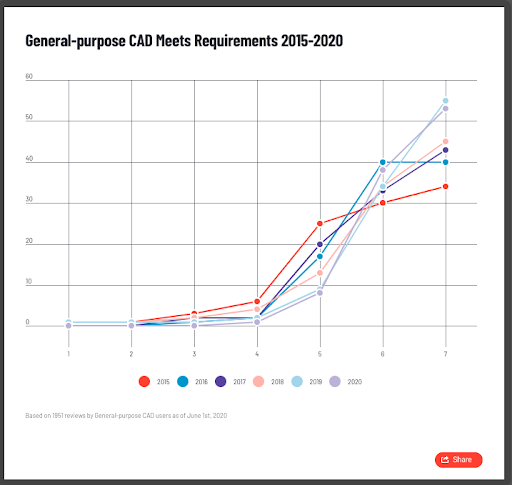 As vendors continue to focus on improving their products, providing new delivery models, and collaborating to complement each other’s offerings, we expect the satisfaction levels to maintain the upward trend.

At the same time, general-purpose CAD software will become more specialized as vendors choose to focus on industries or market segments that are more profitable for them. Ideally, vendors should provide industry-agnostic CAD and specialized versions, but this requires investment in product development or mergers and acquisitions. 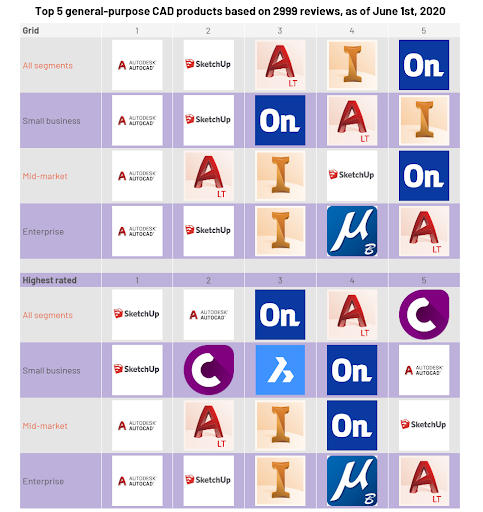 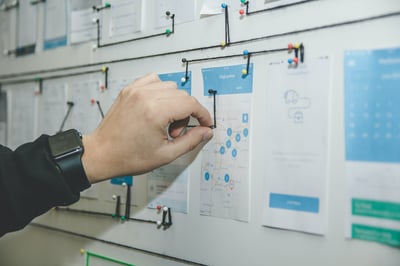 For decades, project management software has been straightforward—buyers knew very well what...

How to Choose the Best E-Commerce Software for Your Business

If you are reading this, you have internet access and have probably already tried to buy... 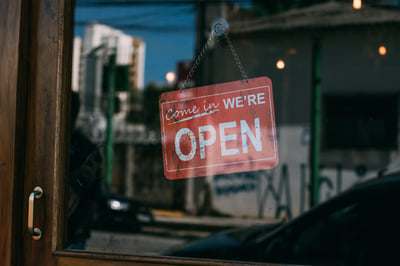 If you sell online, you surely use an e-commerce platform  or shopping cart software  to create...