Data is everywhere, and if we want to be able to do anything with it, we must find it first. Google has built a multibillion-dollar business on this premise by indexing the world’s information and allowing you to find it with a painfully simple interface.

In short, it works by processing words in relation to all the other words in a sentence, rather than one by one in order.

In a blog post announcing the update, Google noted:

Particularly for longer, more conversational queries, or searches where prepositions like “for” and “to” matter a lot to the meaning, Search will be able to understand the context of the words in your query. 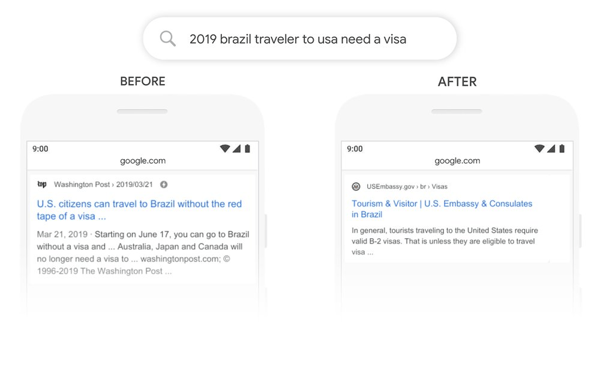 Currently, this improvement is only available in English in the United States, with plans for expansion to other locales and languages.

Mohammed Terry Jack (research engineer at London-based NLP startup, wluper) remarked that in most cases you won’t notice the difference, but for those that you do (such as negations), it is much better.

AI in the wild

At G2, we’re particularly excited by this development as it reflects two key trends:

Matthew Miller is passionate about emerging technology and its impact on society and businesses. He most recently worked as an AI research analyst at CognitionX, a London-based AI-powered knowledge network and host of one of Europe's largest AI conferences. He also cofounded a pro bono voice technology group, VAICE, which has helped companies discover the best ways to incorporate voice tech in their business and their business models. At G2, Matthew focuses on the AI and analytics categories and looks forward to learning more. Get in touch at mmiller@g2.com.